A tank veteran on Fury: 'Very realistic, but it can't show the full horror of war' 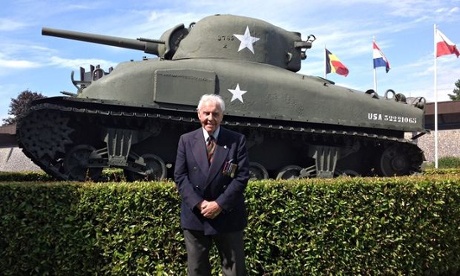 I first met Bill about five years ago in his local pub following a Remembrance Day service in Wellesbourne, Warwickshire. Recently widowed, he sat in the corner on his own, nursing his pint. We struck up a conversation about the war and over time became firm friends.

Bill was called up in 1942 and joined the Essex Yeomanry where he trained as a radio operator, later being assigned to Sherman tanks. Aged 21, he was one of the first ashore on D-Day, tasked with firing at a German gun emplacement defending the village of Le Hamel, before rejoining his tank. Within 45 minutes, he'd been shot by a German sniper hiding in the adjacent field. The soldier next to him was killed. Bill played dead, his colleague slumped on top of him. His leg bears the scar to this day.

 
Within six weeks of being repatriated to Britain, Bill was back on the front line, fighting his way into Germany in a Sherman tank. In March 1945 he was one of the first people across the Rhine in a floating "Duplex Drive" Sherman. (Like the Tiger, Bovington tank museum - which supplied tanks for , and hosted the press junket - is also home to the only surviving one.)

 
Set over 24 hours in April 1945, Fury follows the fortunes of a Sherman tank commander called Don "Wardaddy" Collier () and his crew as they find themselves behind enemy lines, outgunned and outnumbered, in a desperate last pitched battle to the death. Much of the movie tracks the evolving relationship between Wardaddy and Norman "Cobb" Ellison (Logan Lerman), a fresh recruit shocked by the reality of war.Bill was also the youngest in his tank and had a very close relationship with his crew. But they were better disciplined than those in Fury.

Director David Ayer has spoken of the lengths gone to for maximum verisimilitude, with computer graphics eschewed save for the laser beams used to show tracer fire. Though Oxfordshire doubles for Germany in terms of location, Ayer was able to use a real German Tiger 131 tank, the only working model in the world, captured from the Germans on the secret orders of Winston Churchill (and currently housed at Bovington). For Bill, the scene in which this Tiger tank takes on three US counterparts was the most realistic part of the film.

As the film makes clear, a Sherman tank was a lightweight in comparison to a Tiger. The Sherman weighed 33 tonnes and had a 75mm gun, compared to the Tiger's 54 tonnes and a 88mm gun. A Tiger also had 3.9 inch thick armour, so shells from a Sherman literally bounced off it. In response to an attack from a Tiger, Wardaddy yells: "It will end soon. But before it does, a lot more people gotta die." Again, says Bill - quite right. Though the film can't go far enough.

The corpses certainly mount up in Fury, particularly in the final scene. This was the only part Bill felt lacked credibility.

One scene from Fury shows Wardaddy attempting to toughen up Norman by forcing him to shoot a German prisoner in the back, against his will. The prisoner pleads for his life and shows both of them a photo of his wife and children. This brought back memories for Bill of the end of his own war, spent in the German port of Kiel.