The Orphanage: the film that frightened me the most 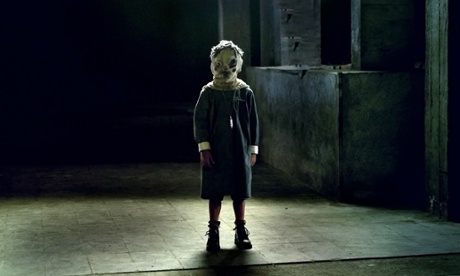 I can't explain why what just happened, happened. I downloaded, from iTunes, The Orphanage, the 2007 Spanish film that is more responsible for making me jump like soap out of wet hands than any other film I've ever watched. I wanted to make sure it still scared the bejesus out of me as much as it did the first (three) time(s).

I had made some preliminary notes on my laptop on what it was about this film that so clearly pushed my terror buttons. Some keywords came to mind, including "fear of children" and "creepy children".

When I paused the film at a particularly tense moment to take a much-needed breather for tea, parapsychologist Aurora was in a trance and speaking to unseen children wailing that they were sick. The lights were out, but the night-vision monitors of Aurora's team lit her like Paris Hilton in her sex tape.

Breather done, I returned to the same scene, but something was awry. While the film played, frames of neon pink flashed up, broadcasting those lines from my notes: "fear of children" and "creepy children". First Aurora was seeing hearing voices, now I was seeing visions.

Predictably, by the time I managed to film it on my phone, the hot pink and the menacing words were gone. Only flashes remained.

So let's flashback to the beginning of my long and torrid relationship with this Spanish fairytale horror, the debut feature of Spanish film-maker JA Bayona. I didn't know what I was getting into when I first went to see it. I'd been out of the country, and when a friend wanted to see a film called The Orphanage, I tagged along. I knew nothing but its name, which conjured up some kind of – possibly Nicola Philibert's take on a rustic French orphanage, complete with sums, spelling and kindly, bespectacled house masters. What I saw was brilliantly, shudderingly not that.

The film is set in classic horror terrain: a remote gothic pile close to a deserted beach, with a great swirl of grey ocean and caves that flood at high tide, and a lighthouse. Guillermo del Toro, of Pan's Labyrinth fame, is the executive producer, and it has his dark fairytale thumbprint written all over it.

In the film, Laura (Belén Rueda), her husband, Carlos (Fernando Cayo), and their cherubic adopted son Simón (Roger Príncep), return to what was Laura's childhood home, which she shared with a gaggle of other orphans before she was adopted. They plan to turn it into a home for children with learning difficulties, along with Simón, who has to take daily medicine for HIV.

Simón, who is one for having imaginary friends, gets particularly friendly with a boy he calls Tomás. On a trip to the caves we hear him asking a shadow: "Do you want to come to my house later to play?" At this point, nothing horrifying has actually happened, but the film is so laden with suspense and the genre is so beautifully predictable that it's impossible not to let out a hissing "noooooo." We never see the invitee, but we are shown footprints in the sand going deeper into the cave. Just to be sure his playmate will come, Simón, like Hansel and Gretel, leaves a trail of seashells all the way home. Again: noooooooo!

The film drips with gothic tropes: there are boggle-eyed dolls, a creaking-in-the-breeze roundabout in the garden, chiming bells and juddery Super 8 films of children playing in happier times. As with all the best in the gothic genre, what's horrible is grounded firmly in the familiar and, in this case, in the domestic. What this film does so brilliantly is to combine the mundane with the truly menacing.

Horror is riddled with creepy children: there's Damien in The Omen, the black-haired, porcelain-fleshed girl in The Ring trilogy and The Shining's Grady twins. In his , Peter Bradshaw wrote: "[It] revives the genre's great theme: our profound yet unacknowledged fear of children. We are afraid of their vulnerability, which is our vulnerability, and the mysterious otherness of their private, mental worlds." It's possibly similar to why people are afraid of dogs – you never quite know what's going on behind puppy-dog eyes.

We see this private mental world often through , windows on to the pre-pubescent subconscious, and Simón is no exception. When his friends start showing up, the distance starts to open between him and Laura. Then he goes missing – and stays missing for more than six months, provoking a very of-this-world police search. It's only through getting into the minds of the children that Laura is able to find her son.

"One, two, three: knock on the door!" … In one of the film's most jumpy scenes, Laura is forced to play the game that she and her contemporaries played as children again but this time in the dark. She goes along with it, and is led by a series of clues down to the basement of the house where, among the supernatural detritus, she finds the real withered corpse of her dead son. The nighttime crash she heard months before was, at least in this case, no ghoul but Simón falling down the stairs to his death.

This is kinderhorror at its most emotive. But what's so potent, after the horror has died down, is the very raw sense of loss and bereavement at the film's centre. As emotionally wrought as an Ian McEwan novel, what makes you jump – and, I'll hold my hands up, scream like a banshee – doesn't linger. It's the humanity of the thing that went bump in the night that makes you shudder for a long while after.